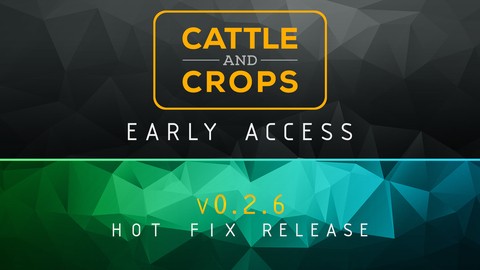 With the Hotfix Update 0.2.6.0 we have fixed some of the issues that have occured with the release of the Straw Update.

Changelog:
BUG FIX: Selling bales – Bales can now be sold at the trader
BUG FIX: Baler – After the press has been emptied, you can now also press other crop varieties
BUG FIX: Strautmann – doesn’t have a rigid drawbar after a reload
BUG FIX: There was a world texture on the bales which caused displacements
BUG FIX: The Tucano swath placement isn’t copied on other Tucanos any longer
BUG FIX: The Quadrant pickup position is being loaded correctly from a save game now
CHANGE: Chaser when threshing – after unloading, the chaser drives back to its waiting position so he doesn’t get in the way on the field
CHANGE: Plants move more naturally now when being hit by a vehicle
CHANGE: The Quadrant pickup clogging now works with gameplay settings

We’re looking forward to your feedback!

This website uses cookies to improve your experience while you navigate through the website. Out of these, the cookies that are categorized as necessary are stored on your browser as they are essential for the working of basic functionalities of the website. We also use third-party cookies that help us analyze and understand how you use this website. These cookies will be stored in your browser only with your consent. You also have the option to opt-out of these cookies. But opting out of some of these cookies may affect your browsing experience.
Necessary Always Enabled

Any cookies that may not be particularly necessary for the website to function and is used specifically to collect user personal data via analytics, ads, other embedded contents are termed as non-necessary cookies. It is mandatory to procure user consent prior to running these cookies on your website.